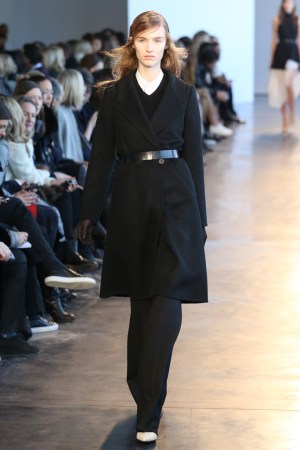 To clarify, the collection Olivier Theyskens presented Monday was his first runway show for Theory. It is not to be confused with Theyskens’ Theory, the capsule line that has displayed during New York Fashion Week since fall 2011. In other words, Theyskens’ Theory doesn’t really exist anymore, but Theyskens is still the creative director of Theory, a role he has held since 2010.

The company quietly mentioned this shift during its pre-fall appointment, and the aesthetic differences were registered immediately on the runway. In fact, it was startling at first to see the spare tailoring that was comparatively conservative to the downtown, experimental attitude of Theyskens’ previous shows for the brand. After the show, the designer stressed the importance of establishing his new, more publicly promoted vision for Theory, “revealing the qualities of Theory — neat, disciplined and precise — and that it still has room for people with identity and a lyrical aspect.”

Theyskens served that mandate well, escalating the collection’s core of minimal basics by tweaking proportions and developing fabrics. The classic white shirt came elongated as a crisp, straight tea-length dress and a roomier version that cut away on the left side. The asymmetrical hem was a repeat effect bringing controlled drama to dresses, some with transparent skirts, and hourglass jackets that were folded into structured ruffles on one side.

The lyrical side Theyskens mentioned was revealed in shiny jackets — silk bonded to wool — beautifully embroidered with green and silver florals. The lineup could have used more of such showpieces, but pushing Theory’s brand parameters is a delicate situation, as Theyskens knows.