While still as thought-provoking as some of the designer’s past efforts, the collection was noticeably toned down in its sartorial strangeness. 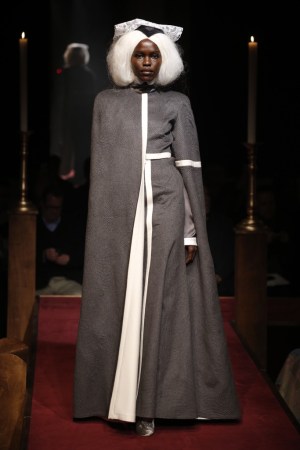 High Church was the set for Thom Browne’s fall collection, which, while still as thought-provoking as some of the designer’s past efforts, was noticeably toned down in its sartorial strangeness. It even provided glimpses into Browne’s more commercial side, a notion that is, for this designer, quite provocative.

Nevertheless, there was still the drama-filled set: guests sat on pews, incense filled the room, white candles burned and kneelers were positioned at the foot of the elevated runway. Before the show started, men dressed as priests knelt on them and then as each model stepped out, a priest lifted her white lace veil. If it wasn’t clear that Browne was embracing a monastic aesthetic, the opening look — a long gray coat with white paneling detail — drove home the point.

But that wasn’t the only takeaway. Showing off his tailoring skills, Browne worked herringbones, felts and tweeds for such looks as jackets with exaggerated circular sleeves and skirts with volume centered at the waist like a bubble. Elsewhere, Browne kept the quirks even more in check — a welcome move. The suiting, which the designer knows so well, was a particular standout. One lovely number, a fur-trimmed gray suit with a gold inset, had an old-world, ladylike appeal. So wearable, it could work on his most famed customer, First Lady Michelle Obama.