Armor, once collected by her parents, was the starting point for the designer’s savvy fall collection. 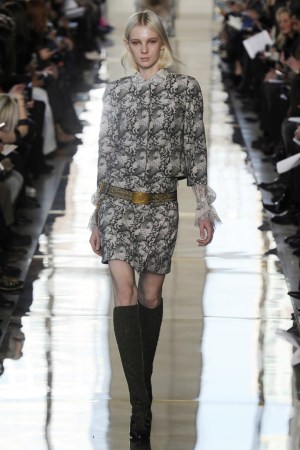 Armor, once collected by her parents, was the starting point for Tory Burch’s savvy fall collection — savvy because she interpreted the inspiration with subtlety.

Instead of metal breastplates, which are tough to pull off commercially, Burch captured the vibe via sleek silhouettes, pretty metallic textures and baroque touches. A chic coat, for example, featured a tweed bodice and wool sleeves, the skirt rendered in fur. Its structured lines softly hinted at Burch’s theme, as did the shimmering foiled wool she used for an oversize turtleneck sweater shown with a pleated lamé miniskirt.

The armor reference was more obvious in the styling of the show, particularly the accessories. Ornate gold belts cinched several looks. Fur handbags were demonstratively looped around the neck and worn like muffs, suggesting they could double up as padded protection. Others were embellished in gold studs for a tougher attitude.

Burch ended things with some busy tapestry and Asian patterns, which, while out of place with the rest of the lineup, added variety. Many were shown with cool carpet-like bags. Feisty and fun, they were worth fighting for.