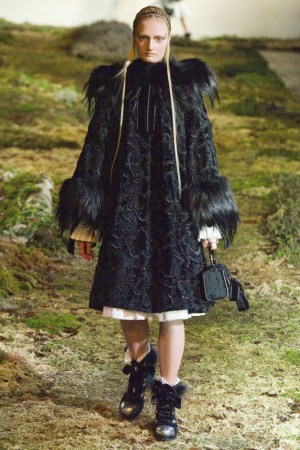 A shadowy figure emerged against the white-ish background, negotiating her way across the bumpy, bleak terrain, patches of its wintry brown moss covered in snow. In the darkness she’s only a silhouette, a fluid triangle, a hint of white fluttering beneath her knees. “It’s beauty and the beast, a wild beauty,” said Sarah Burton backstage before her Alexander McQueen show. “And there’s kind of an innocence, but stripped back and liberated.”

Burton got it wrong. Not beauty and the beast; beauty was the beast in a show that felt like a dangerous, magical fairy tale come to life. Gorgeous creatures made wild by circumstance radiated inner gentleness in sharp contrast to spring’s warrior-woman bravado. They wore graceful trapeze and empire shapes while, on the surface, intensity reigned with elaborately wrought textures. These could be as sweet as cotton eyelet or as visceral as a dress crafted from fox pom-poms and goat fur.

Veering infrequently from her primary silhouette and palette of mostly black, white and dark brown, Burton worked that narrow scope for considerable diversity. A dress with an open neckline and big sleeves channeled milkmaid, while one in airy black-on-white organza with a big, rounded collar took on a monastic air.

The furs were romantic, feral stunners in goat, skunk and fox. And she broke from her dress norm for an ivy velvet jacquard jacket and pants fit for a wanton version of Thomas Gainsborough’s “The Blue Boy.” She heightened the enchantment with strokes of color — deep, brooding green and purple.

The mood recalled one of Lee McQueen’s collections, “The Girl Who Lived in the Tree.” As in that triumphant tale, Burton’s heroines journeyed from the shadows into the light, their illumination apparent in the pair of gowns that closed the show, ethereal but not fragile wonders bedecked with celestial embroideries. Exquisite.