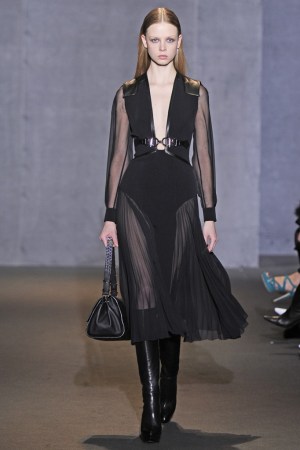 Tina Chow and Yayoi Kusama, Andrew Gn’s two muses this season, may not have a lot in common sartorially, but the two coexisted effortlessly on the designer’s fall runway.

One was strikingly cool, the other artfully eccentric. Together, the mix elevated Gn’s ladylike leanings with an infusion of luxe textures, strong colors and ample fun.

He started with several sophisticated dresses, including one black style with a sculptured bodice — its plunging neckline held together with a graphic metal clasp — and a sheer plissé skirt. Some languid pieces featured cascading hems: a tricky proposition, though Gn rendered it with a romantic vibe.

The designer’s surface details were particularly interesting. There were Baroque appliqués on several shift styles, and snakeskin insets on chic Ikat pencil skirts. The latter worked best when shown with a green sweater featuring a Japanese mangalike patchwork robot, the collection’s main visual motif. It balanced the whimsical with the chic just-so, and ultimately became Gn’s most effective fusion of Kusama and Chow.