The fall collection was as wide-ranging a lineup as Phoebe Philo has ever shown. 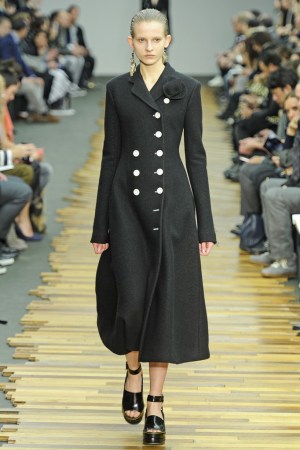 Phoebe Philo’s professional raison d’être has always been about finding practical solutions to real-life wardrobe concerns. Typically, she has tackled the question of what women need and want, and come up with a clear, finely honed seasonal message. For fall, she seemed to take on another sartorial concern: what her stores need and want. Judging from this collection, they want diversity, as this was as wide-ranging a Céline lineup as Philo has ever shown.

She started with a lady moment worked with a proverbial Phoebe twist: fit-and-flare coats with off-beat button treatments; for example, a double-breasted closure with three buttons on one side and six on the other, the latter forming an obtuse angle rather than a row. That ruse continued with portrait collar tops tucked into wide-legged trousers. This established a subtle retro vibe that wafted in and out.

There was a strong lineup of coats, the most striking a glamorous large-collared camel number cinched with a wide fur belt. It also established via button treatments the notion of asymmetry, with some intriguing off-kilter cuts.

Both directions proved interesting. Yet except for her coats, Philo seemed disinterested in working through her proposals. She touched on great-looking sweater dressing, the occasional athletic reference and some arty touches such as fraying-edge fringe. Along the way, she made some peculiar choices. Why, for example, a passing nod to blue gingham two seasons after Miuccia Prada made such glorious use of the fabric? And you can turn an elbow slit vertical, but it still belongs to Helmut Lang.

Such elements might have been developed and taken somewhere, but instead Philo delivered a fashion pastiche that lacked cohesion while still managing to deliver plenty of chic.