Karl Lagerfeld's spectacle will surely trigger conversation, as it had a great deal to say about fashion in its current state. 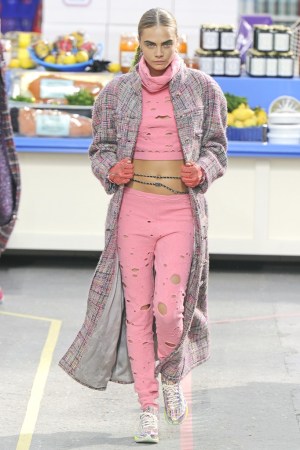 By the time they arrived at the Grand Palais on Tuesday morning, many guests already knew of Karl Lagerfeld’s fall ruse: Chanel Shopping Center, a giant supermarket.

Advance word didn’t dampen the first-sight impact of the 139,930-square-foot labyrinth — by Lagerfeld’s preshow account, it would take each model 4.5 minutes to walk — a veritable Costco for the tony set, stocked with everything from soup to nuts to Jambon Cambon and a chain saw, each bearing a label that riffed on house lore. (All were Chanel and Mademoiselle centric; while her silhouette and various incarnations of her name appeared all over the place, not a single item referenced Lagerfeld by name or by his famous likeness.) Tea offerings included The Little Black Tea and Jasmin Dragon Pearls; paint colors were numbered and named strategically: 1903 Bleu Confection, 1914 Gris Jersey, 1954 Jaune Etienne.

The space was a cart-pusher’s delight, bright white and shiny with primary accents. Vertical bars of red, blue and yellow gave graphic detail to the walls; the I-wish-D’Agostino’s-were-so-clean shopping carts picked up the spiffy red and blue. Early arrivals browsed intently, smiling with glee and wonderment at the 500 or so product labels and thousands of units, stopping for shameless selfies with bath-bead towers and promotional signing proclaiming certain items “+ 30%.”

The spectacle will surely trigger conversation, as it had a great deal to say about fashion in its current state. On the most basic level, it created excitement. Near the end of a largely quiet season, here was a huge, flamboyant — some would say decadent — display of brash, limitless imagination and spending power. To that end, two points must be made: All real food was to be distributed to charities through Chanel’s in-house caterers, and most of the packaged goods (in reality, empty packaging) will be used for window displays in Chanel stores around the world.

The whole thing stood in distinct opposition to last season’s glorious art gallery, a quantum leap from “fashion is art” to “fashion is supermarket fodder” — Lagerfeld’s point exactly. “After the art show, I said, ‘What can we do worse, something [more about] today?’ The supermarket is a thing of today’s life. Even the woman who wears expensive clothing goes to the supermarket, but she shouldn’t go in stilettos.”

That convergence of elite and mundane is one of personal fantasy for Lagerfeld. “I cannot go out,” he said. “I don’t want everyone taking my picture, and then they post them and say mean things.”

His dream of the ordinary life of the well-heeled made for intriguing viewing. In keeping with the supermarket motif, he threw out countless ideas. Along the way, he pulled off a near-impossible juxtaposition, reinterpreting his couture corsetry theme while infusing the collection with a sporty attitude. (Unlike his haute corsets, these had multiple zippers for ease of function — very of-the-people.)

Also translated from couture: sneakers. His riffs on trainers in mixes of tweeds and skins came in low and boot versions. “The flat shoe makes the woman equal of men,” Lagerfeld said. “When they have high [shoes], they play a part like a geisha, and they can’t be expected to be taken that seriously.”

Nor can they navigate the grocery aisles with ease unless properly turned out. Lagerfeld offered them options: corseted suits with baggy pants, linear skirt suits, loose tweed coats over tight knits, bold citrus-hued toppers with feisty printed linings and dresses to match, big sweaters, shorts over sweats, a bit of powder-pink fluff and some moody gray metallics. Throughout, there were grocery-inspired touches: a suit “the color of honey and jam,” a Hefty-bag coat, a tweed with a light glazing of refrigerator frost.

As for the accessories, he piled on fake candy necklaces and pop-top-can bracelet medallions half opened upon explosions of pearls. Some handbags were wrapped in meat packaging, while another mimicked an egg carton.

It all came at lightning speed, so some of the fashion news was hard to process. Even with those lapses, it made for a great time and a delightful fashion scramble.