In his strongest collection yet for the house, Raf Simons led his Dior woman from spring’s dense, mysterious garden to more urban enclaves. 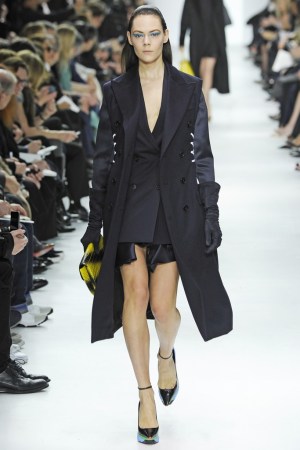 Raf Simons has arrived at Dior. After a period of polite, often lovely and sometimes uncomfortable homage, for fall, Simons started to put his mark on the house in no uncertain terms. It was a necessary move that signaled Dior’s willingness to temper New Look worship with real-world pragmatism.

“When you take a position at a heritage house, you also think about your whole situation and your own position,” he said before the show. “What you stand for, what you believe in and what you express naturally and how you can add that to the world you’re representing.”

Simons was probably smart to transition into that process, using his earlier collections to prove both his respect for and command of the house history and codes. That accomplished, this collection was his strongest yet for the house. This time, he led his Dior woman from spring’s dense, mysterious garden to more urban enclaves, represented by the “electric flowering” of creative, color-changing ceiling lighting.

That meant all kinds of situational clothes, including a situation designers seldom reference when discussing their runway fare — work. Impressive tailoring was rendered succinctly — a lean pantsuit in burgundy flannel — or in masculine-feminine opposition as in a double-breasted jacket over a short, fluid dress. And yes, there were coats. Simons turned classics into statements by adding saucy corsetlike lacing up the sides, and tinged a gorgeous gray astrakhan with shots of lilac. Though his sleeveless minks made a snappy styling ruse tossed over the right arms of girls in jackets, one longed to see at least one of them on, especially as they came in exuberant yellow and green. Too often in his color plays, Simons worked in the brights-with-black genre, which at times swung mundane.

Not so the bolder pairings that recalled the designer’s heady Jil Sander days. Double dresses paired a sturdy layer cut for ease over a short, racy underpinning, the former slit high up one thigh and left free to fly open despite an embroidered faux brooch. In fuchsia wool over emerald crepe and yellow over pale pink, these played like enchanting, postmodern cotillion dresses.

And speaking of enchantment, evening dazzled with long, embroidered tank and T-shirt dresses worn over T-shirts. Yoo-hoo, Jennifer Lawrence, why not lose the ball gown and dress your age — and this century?