The designer channeled the notion of PYTs with a lineup that was sophisticated and full of youthful charm. 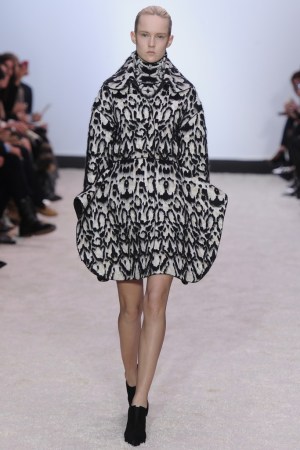 PYTs. Many designers chase the demographic; few, however, do it better than Giambattista Valli, who hits the sweet spot each season. Fall played into that notion again, with a lineup that was sophisticated and full of youthful charm.

He made the latter point most effectively via his silhouettes: Not one look came past the knee. Valli also approached the idea with some interesting textures and new riffs on volume. Specifically, several fit-and-flare dresses and coats were cut with geometric flaps on the side of the waist for an effect that resembled a handkerchief or godet skirt. The shape lent a graphic, modern edge to traditional cocktail looks.

As for the surfaces, Valli played with sexy animal patterns like zebra, working them in woolly embroideries and jacquards — some literal, others abstracted to hint at the motif. His three-dimensional wool and guipure embroideries were particularly romantic, especially on coats and a fit-and-flare dress.

The designer ended the show on a refined chic note. Dresses came in grid weaves that were finely embellished in ruby beads, including one style featuring a tank top and puffy little skirt. With this, Valli sent a clear message to his PYTs in the front row: The social season can begin.