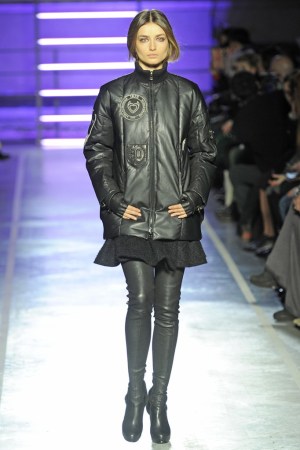 She started out with a few identical looks from her pre-fall lineup, including a cream trench-inspired wool coat with raw edges and detailing that resembled electrical tape. Newsier, though, were the designer’s mixed-media numbers, most notably a sporty knit blouson jacket amped up with kid lamb inserts that gave off a cool urban vibe.

Interesting streetwear references were worked throughout. A flash of neon pinkish-orange was added to a voluminous sweater done in a sturdy double satin, while a series of oversize sequined party dresses in baby pink and fire red were cut in masculine football jersey shapes.