Gaultier showed a retro-futuristic lineup that while sometimes outshone by the theatrics, demonstrated he still has his own perspective on Planet Fashion. 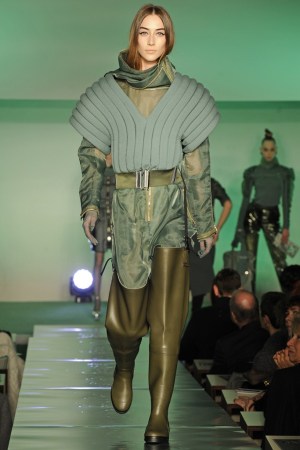 Ready for takeoff? Jean Paul Gaultier certainly was as he embarked on another campy trip, this time to space. On Saturday night, the designer showed a retro-futuristic lineup that while sometimes outshone by the theatrics, demonstrated he still has his own perspective on Planet Fashion.

Gaultier chose the modernist Espace Oscar Niemeyer — the French Communist party’s base — as the venue, which was swathed in green lights. Some guests, including Rihanna and Beth Ditto, were seated under an impressive dome at long desks that were primed for politburo committee meetings.

Before stepping onto the runway and boarding Spaceship Jean Paul, each model — cast by age demographics — had to go through an amusing security check. The clothes reflected the theme. Rendered in interesting techy materials, there were metallic flight and moto jackets, padded pants and skirts, zippered sweaters with silver insets, and shimmery jumpsuits. Many pieces were marked by cocoon shoulder treatments; the more sculptural ones had hints of Courrèges and Cardin.

The look worked best when slightly softened. A leather slipdress, for example, came with a chiffon overlay embellished with crystal stones. It was sexy, even a bit sensual — in a galactic way.

Halfway through the show, the designer took a space walk into punk with Mohawked women, men and children in tartans and Union Jacks.

The overall takeaway: Austin Powers meets Sid Vicious. A disconnect, yes, but perhaps deliberately so. After all, one of the few places the two could coexist would be on a fictional space odyssey with JPG as pilot.