At Kenzo, wild and weird graphic patterns such as zigzags and undulating lines in bold colors were delivered on sharp tailoring and voluminous coats. 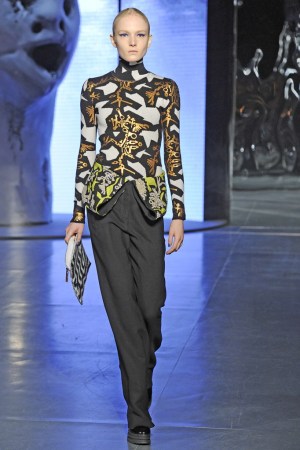 Because David Lynch automatically makes things cooler, weirder and generally more interesting than they would be otherwise, Humberto Leon and Carol Lim had him do the music and set for their fall Kenzo show. The Lynchian special effects included a sculpture of a creepy, dead, baby-ish head surrounded by a film screen projecting smoke, a snappy American soundtrack and an extra-narrow runway that wound through the audience and allowed for extreme, up-close viewing of the clothes — points for Lynch on that front.

The collection had a strong point of view, though its ties to the director’s body of work were tenuous, boiling down to the language in the show notes, which read, “The whole world is wild at heart and weird on top,” and cited creatively titled color schemes such as “Wild Lula Lime” and “Midnight Dorothy.”

Wild and weird graphic patterns such as zigzags and undulating lines in bold colors were delivered on sharp tailoring and voluminous coats. Wearing a full skirt over a trim, printed suit is silly, but the look emphasized the collection’s clash of patterns and proportions. Within the visual onslaught, the clingy knits done in bold intarsias and foiled embroideries stood out.