Yiqing Yin's debut collection for the house featured an update on not only its trademark prints, but also on the way they were worn. 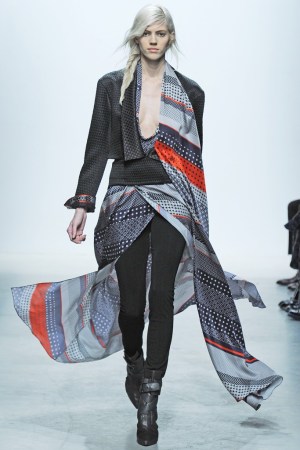 With its third designer in as many years, Leonard is hoping to nail its ongoing efforts to rejuvenate the brand. It may have found the right match in Yiqing Yin, whose debut collection for the house featured an update on not only its trademark prints, but also on the way they were worn.

Yin mixed and matched archival patterns on layered looks that variously combined floaty silk and chiffon twisted and draped around the body, leggings and sheer long-sleeved T-shirts, and wool pieces such as a wide-collared patchwork coat. Paired with buckled boots, the outfits gave models a quietly confident swagger.

Particularly appealing were the organic prints inspired by the work of Japanese illustrator Takato Yamamoto, which Yin developed by splicing together vintage Leonard designs. One of these motifs appeared on the back of a burgundy cocoon coat, and was also rendered three-dimensionally on a lavishly embroidered dress.