Nicolas Ghesquière established a template of beautiful, real-world clothes that many women will want to wear. 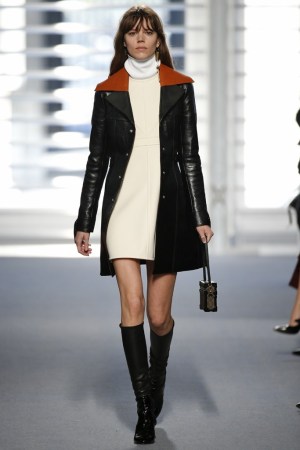 It was the most anticipated show of the season, and it marked a sea change: whimsical romance out; chic pragmatism in. As Louis Vuitton’s creative mantle passed to Nicolas Ghesquière from Marc Jacobs, the difference came into sharp focus. Jacobs is an emotional designer, Ghesquière, a cerebral one — a distinction very evident in their work.

Ghesquière’s debut ushered in a new era for one of the most storied names in luxury. “It’s a balance of newness and heritage at the house,” Vuitton chief executive officer Michael Burke said postshow, explaining Ghesquière’s mandate. “Audacity that leads to eternity. There has to be a certain sense of timelessness.”

Guests to Vuitton’s vast tent in the Cour Carrée at the Louvre were struck by its newly low-key interior: a precision maze of multilevel seating covered in beige flannel and inset with sections of white cushions. Wide silver metallic blinds covered the clear sides of the tent.

The mood felt right in keeping with Ghesquière’s modernist reputation, and the clothes featured every bit of precision for which he’s known. Ghesquière’s work is cerebral not in the deep-thoughts philosophical sense, but in that his approach is both artful and clinical, with every detail plotted out and executed to exquisite perfection.

Yet those expecting a major statement of bravado were surprised. Unlike at Balenciaga, where he turned haute archival concepts into a bold futuristic look with a streetwise edge, here Ghesquière didn’t make a bold pronouncement of his definitive direction for Louis Vuitton. Rather, he established a template of beautiful, real-world clothes that many women will want to wear. He said he didn’t start with a story or theme, but thought about how the chic women in his life like to dress.

“The clothes have to be functional,” Ghesquière explained. “What do the girls around me want to wear? I’m surrounded by many women, so I listen to them. I collect a little thing from all of them and mix it. A wardrobe.”

Though he started out theme-less, the clothes had a subtle Sixties vibe, with dresses and skirts cut in crisp A-lines, a recurring theme, some detailed with big contrasting pockets or bold zippers. Ghesquière has always loved a fabric mix and worked several to impressive effect, particularly in sweaters with big, printed bands across the front and dresses cut from leather spliced with diagonal panels.

Not surprisingly, he put a big focus on coats, neat silhouettes in tweeds and glorious leathers that celebrated the house origins. As for the bags — they were both distinctive and immediately signature, from the utterly charming mini trunk to bigger styles with diagonal quilting.

Overall Ghesquière made an impressive start that established a premise of alluring practicality while addressing specific wardrobe needs. Surely legions of women will sign up.