The designer sent out a group of female samurais for fall. 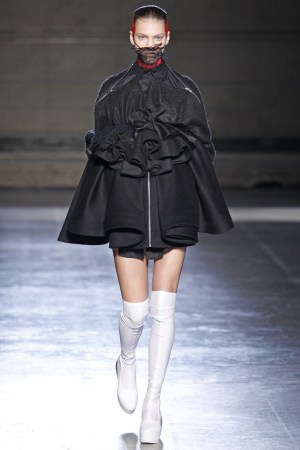 Masha Ma sent out a group of female samurais for fall. Taking a step toward conceptualism, the designer worked heavy layering with kimonolike folds on intricate pieces that at times featured countless items worn one on top of the other.

Ma said their shapes were inspired by an “epiphyllum burst into bloom,” referring to the orchid cactus and its large flowers. The romantic armor-esque pieces looked best when the designer played up their contrasts via different textures. One ensemble comprised a heavy wool jacquard jacket over a plain white shirt with another layer in fur and a ruched jacquard and satin skirt. Done entirely in cream, the look was held together by black nylon safety belts. Although most of the layering struck a harmonic note, some of the clothes could have been less complicated for an easier segue into reality.