The collection was on message with a fashion mood at large, but delivered with Prada’s own special slant. 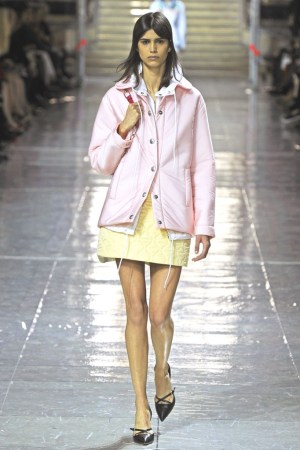 One imagines that Miuccia Prada is a designer not particularly concerned with trends. Yet there they were, some of the season’s most prevalent motifs — athletic practicality, fantastic knits and novelty furs, a subset of generally excellent outerwear — crystallized on her fall Miu Miu runway. The collection was on message with a fashion mood at large, but delivered with Prada’s own special slant.

The attitude was perky and young, captured in neat, sporty nylon jackets layered over hooded windbreakers and quilted minis. They came in combinations of sweet pastels — white with pale pink, sea-foam green and baby blue — and classic bolds — gray with royal blue, kelly green and yellow — that were eventually gussied up with foiled brocades and chunky embroideries. Throughout, the slightly Sixties silhouettes suggested school uniforms, particularly the series of tailored gray wools and sweater-and-skirt looks. It wasn’t all innocence. Underneath the multitude of great boxy boyfriend jackets, the models’ shirts were unbuttoned to show their bras, and animal-printed furs added a moment of chic subversion.

After the show Prada said the collection was “about no useless design,” adding that the intention was “to be more real.” Everything was highly wearable, utilitarian even, when it came to the long raincoats that came in clear plastic or traced with bright graphic stripes, and flat rubber rain boots.