The designer reached deep into her bag of tricks for fall — literally. 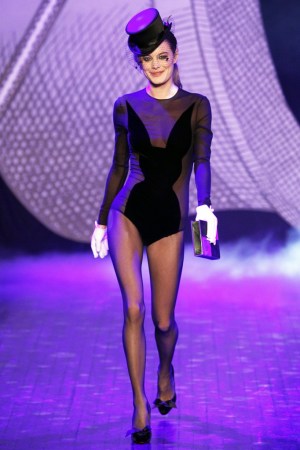 Olympia Le-Tan reached deep into her bag of tricks for fall — literally. Her show played with bluff and illusion, as models emerged from a giant magician’s hat painted on a stage wall. The first girl popped out of the mirage dressed as a Playboy bunny. “I Put a Spell on You,” purred through the loudspeakers.

Card tricks became motifs on HotPants (which were matched with a velvet swallowtail coat) and as prints on flouncy short skirts and body-hugging dresses with Forties airs.

Some looks — like a pencil skirt with a giant red heart on the derriere — seemed strictly burlesque. More wearable options included a velvet varsity jacket and a slim tuxedo jacket with heart-shaped lapels.