Chitose Abe’s career trajectory has been unconventional, almost to the point of mythic by fashion standards. 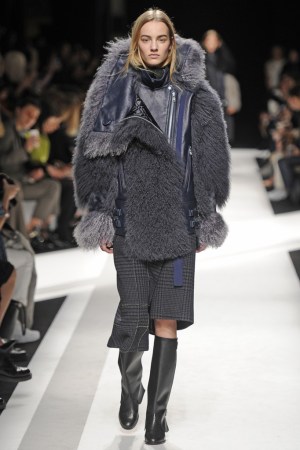 Chitose Abe’s career trajectory has been unconventional, almost to the point of mythic by fashion standards. More than 15 years after Sacai’s successful launch in Japan, Abe’s profile and business have surged since she put her show on the Paris schedule in 2011. Her niche hybrid dressing has become a hot ticket in town, and for fall she more than delivered on the hype. It was the sharpest, most sophisticated collection she’s shown in Paris.

It would be ridiculous to say that Abe’s ultraspecific, at times overwhelming, method of fusing multiple garments into one could ever be construed as minimal, yet there was a cleanliness and clarity to the constructions this season. The show opened and closed with incredible outerwear — voluminous motorcycle jackets and puffers further amplified with deluxe gray and ivory Mongolian lamb accents — that were heavyweights in a category for which the seasonal bar has been set insanely high. Lighter coat options included a Pendleton-esque blanket cape and a lean, light-gray tailored coat spliced with ivory quilting.

The rest of the collection was a graceful dissection and reassembly of traditional men’s wear. Fantastic knits, in gray, navy and cobalt blue, came in understandable fusions — a cobalt fisherman sweater sewn to a gray flannel blazer, for example; and slinky ribbed knit dresses with panels of scarf-printed silk ruffles on the skirts. Abe aerated the complicated volumes and compositions with sheer fabrics, velvet burnouts and pleated silks worked with tailored panels on kilts and wrap skirts. They were hybrid dressing at its most simplified. Just tie one on.