The show covered both American and Italian Pop Art, as well as the idea of the individualist spirits of the artists and a whiff of Sixties Mod. 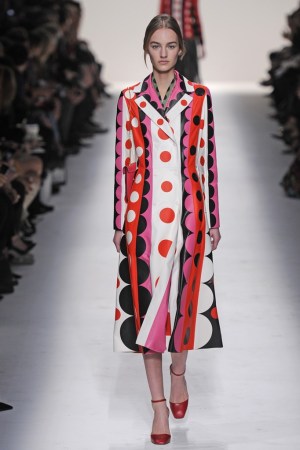 Rome is where the heart is for Maria Grazia Chiuri and Pierpaolo Piccioli. A consistent and deep source of inspiration for the designers, their hometown culture has yielded some spectacular work, this fall collection ranking near the top. Last season, they mined the Roman opera; here, it was women of the late-Sixties Roman art scene, including Carol Rama, Carla Accardi and Giosetta Fioroni, the last the only female member of the Scuola di Piazza del Popolo, or Italian Pop Art. That movement was very different from American Pop Art, as the designers pointed out backstage. “American Pop speaks about Coca-Cola,” said Chiuri. “For us, it’s very normal to speak about Michelangelo.”

The runway proved a broad thematic umbrella. It covered both schools of Pop as well as the idea of the individualist spirits of the artists and a whiff of Sixties Mod — and early Valentino — that played out in a beautiful display of craftwork and rich detail. The show opened with optical dots in combinations of pink, black, white and red, arranged in striking vertical patterns on a slim leather jacket and a fitted sweater worn over a fringed leather skirt. Then came Mod-ish versions of Chiuri and Piccioli’s long-sleeve dress silhouette, this time with flared skirts and stiff shirt collars. Things went light and loose in a minimalist bohemian moment of solid silk dresses with gathered waists and caped backs — a palette cleanser before the designers delved into some exceptionally rich treatments.

Butterflies were rendered in foiled metallics and sequin embroideries in colors so deep and rich they almost looked like paintings on slim coats, trim dresses and an elegant cape. Coats came in stunning intarsias — knits and furs — of oversize florals and geometric patterns, including diamonds culled from Commedia Dell’Arte.

Then the gowns: Exquisite fantasy captured in Nouveau and nature imagery such as birds, stars and hearts were embroidered on the final look. It was superb — and tear-jerking for at least one audience member. Valentino Garavani was visibly weepy by the end of the show, which he described as “very [emotional], because I really found the essence of Valentino with a good new touch. It was fantastic, really fantastic.”