The designer's fall show was an ecstatic melting pot of ethnic dress. 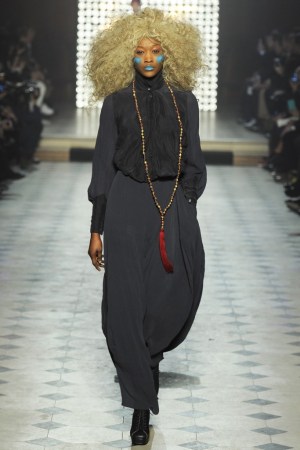 Continuing on her quest to save the rainforest, Vivienne Westwood recently spent time with the Asháninka people in Peru. Her fall runway paid tribute to their elegant tribal prints, embroideries and feathery hairdos.

In fact, Westwood’s show, staged in a Paris church, was an ecstatic melting pot of ethnic dress. The designer blended looks as varied as ruched African dresses and striped cotton desert tunics into one dynamic collection. Imperial Asian influences came through on tailored jackets and ample skirts done in beautiful Chinese brocades, while samurailike ponchos evoked origami with their complicated folds.

Other than the face paint and the theatrical, layered-up styling, Westwood remained mostly in commercially viable territory, delivering a run of great coats in blanket checks and military greens; her softly wrapped dresses oozed easy romance.

For the finale, Westwood worked yards of white tulle into a frothy bridal look, an homage to the House of Worth, as the church’s organs swelled.