Hedi Slimane delivered a strong, charming collection, one with an acknowledged debt to John Baldessari. 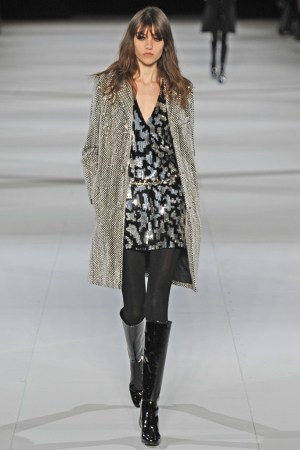 A lot of news, including a vastly improved collection. Unfortunately, that part of the story lost some traction on the way out of the allegedly newly renovated Carreau du Temple. What did they do — shrink the door? Mass irritation gave way to agitation as people trying to leave the venue were literally trapped in place for what seemed an eternity. It was probably five minutes or so, but that’s four-and-a-half too long. This crowd isn’t precious. Anyone who’s covered shows for more than 10 minutes has been pushed, shoved, elbowed and trampled on the way in and out and has dealt with it. This wasn’t that. Never mind that it’s impolite to treat guests to an event that way — who cares? This felt dangerous. Word is that Saint Laurent has a three-season contract on the place. Let’s hope reasonable egress is worked out by spring.

On to the more pleasant news, Hedi Slimane delivered a strong, charming collection for Saint Laurent, one with an acknowledged debt to John Baldessari, whose work and words were featured in the show’s heady invitation booklet. Though a concrete visual connection was tenuous, a more ephemeral one was not. Appropriation features heavily in Baldessari’s work, and has been all over Slimane’s runway since his Saint Laurent debut. This season, a preshow rumor had the designer enlisting Marianne Faithfull for his ad campaign. If true, it makes sense, as Slimane’s collection had its roots planted firmly on Carnaby Street, his Saint Laurent girl du jour a latter-day kindred spirit of Marianne, Jane Birkin and Edie Sedgwick. She likes her silhouettes snappy, short and shiny, whether in Lurex tweeds, sequins or mary janes and boots that looked to have been dipped in deep vats of glitter.

Specific though the mood, Slimane worked it with savvy diversity; he seemed determined to prove himself something other than a one-note designer. As elsewhere this season, outerwear led the way. Though most coats were A-line with a “That Girl” perkiness, his fine use of fur indicated a luxe quotient that hasn’t always been apparent from his runway. The dresses were pretty; the skirts, crisp, and sweaters, running the gamut of cozy from Fair Isle sweet to mink-cardigan indulgent. Most importantly, young though the mood, it all made sense.

As for evening — Le Smoking! Slimane also referenced another element of the house legacy, this one more of a surprise. On a credit sheet, he dubbed a trio of embroidered sparklers with graphic motifs his “John Baldessari couture dresses.” Couture — perhaps a one-season fancy. Or maybe Slimane revealed major news in four little words.