Yasutaka Funakoshi mined the realm of S&M this season, sending his girls out in masked headpieces with whip attachments sprouting from the tops. 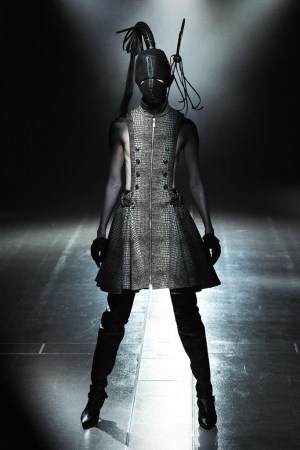 Designer of Alice Auaa, one of Japan’s most popular Goth brands, Yasutaka Funakoshi mined the realm of S&M this season, sending his girls out in masked headpieces with whip attachments sprouting from the tops. Metallic contraptions covered parts of their posteriors and branched out into taillike forms. When exposed, the models’ shoulders were blackened to look as if they were rubbed down with charcoal.

As with his past efforts, Funakoshi put a great amount of detail into the tailored constructions with corsetry, ruffles, studs, straps and other embellishments. Strip away the accoutrements, and a few of the dresses — including a leather minidress with oversize short sleeves and wide hips and a strapless ruffled frock in a reptile print — were quite wearable. The racier looks featured conical bras, netting and harnesses.