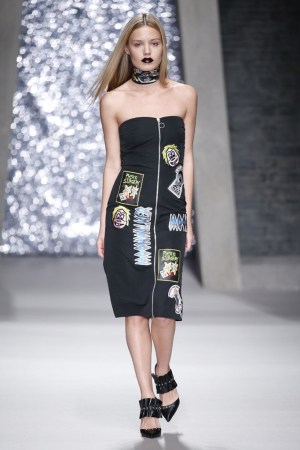 Ashley Williams’ tough-girl gang wore black — and lots of it. Georgia May Jagger opened the show wearing a black, zip-front strapless dress covered in patches with cult-inspired slogans such as “Last Chance to Escape Planet Earth” or “Plastic Surgery,” while another model wore a slick, high-waisted leather skirt over a slogan T-shirt with pink Swarovski crystals at the neck.

A cartoon face, which Williams said represented a “skateboarding stoner boyfriend,” appeared in a repeat print — on dresses, trousers or a blouse worn under a plunging black PVC dress. The image, though, lacked the intelligent kitsch of her past collections. A candy pink sheepskin coat was a fun nod to her playful side, but it did little to offset the overall look of this lineup, which bordered on aggressive.