Inspired by a large-scale life raft he bought online, Christopher Raeburn sent out a sharp, elegant collection that was all about warmth and protection. 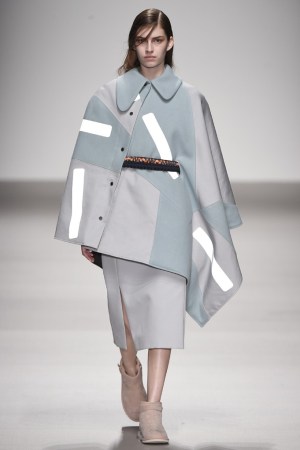 Call him Ishmael. Christopher Raeburn has been thinking about life — and survival — on the high seas for a while, ever since he purchased a 25-man life raft online, including flares and rations to survive three to four weeks on the open ocean. Raeburn, who specializes in recycling and upcycling textiles, based his collection around the orange rubber raft, and other tough materials, for a snappy, polished lineup that also featured a swimming shark motif, a floating bubble print and lots of reflective panels.

“Survival and protection — it’s an unexpected subject for women’s wear,” Raeburn said during a preshow walk-through in his studio. “The collection is about layering and survival, in a very feminine — and I hope fun — way,” added the designer, who riffed on similar references for his men’s wear show last month. For women,  the theme translated into belted, color-blocked cape coats with a quilted lining, woolen toppers with toggle buttons and shark-shaped mittens dangling from the cuffs, along with plaid styles featuring lapels aflame with bright-orange faux fur.

The seafaring idea stretched to a gray sweater with a sleek shark design as well as a rainbow bubble print on zip-front jumpsuits, long silk shirts and knits. Raeburn closed the show with a dramatic green fur-collared cape that was made from pieces of the actual raft, as were orange puffer jackets, patched here and there with the original reflective panels.