The designer tempered the opulence of his fit-and-flare dresses in metallic jacquard by showing the fabric’s reverse side. 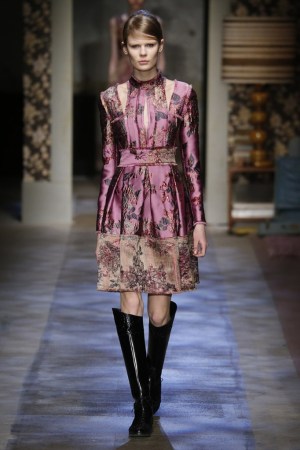 Most Europeans don’t need the Greek debt crisis to remind them they’re feeling poorer. Erdem Moralioglu captured this sentiment beautifully with his shabby-chic show, even skimping on heat for the venue, which was done up to resemble Fifties living rooms — or as one guest wryly surmised, community theater.

The designer tempered the opulence of his fit-and-flare dresses in metallic jacquard by showing the fabric’s reverse side. He also frayed the hems, much like Miuccia Prada did with her brocade-heavy spring collection, which ignited a trend for upholstery fabrics and prints in London. The heavy equestrian boots, worn with many of the cocktail numbers, also dialed down the dressiness.