With this strong, uncompromising fall collection, Jonathan Saunders said he returned to his founding design signatures. 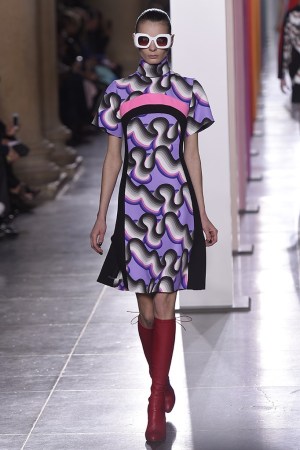 With this strong, uncompromising fall collection, Jonathan Saunders said he returned to his founding design signatures. “I looked back on my first collection…and that moment in time, remembering my MA…and basically why [I] started this,” the designer said backstage after the show, describing his codes as “feminine, modern and colorful.”

Saunders — whose business secured backing from investor Eiesha Bharti Pasricha last month — sent out looks in a rainbow of bold, graphic colors and clean Sixties shapes. Citing British artists Allen Jones and Bridget Riley among his inspirations, along with Martin Creed, who sat front row, he fashioned patterns that ranged from psychedelic clouds to geometric grids to stripes that resembled a television test screen. One box-pleat, knee-length skirt was done in sharp horizontal stripes in blues and grays and paired with a skinny geometric knit polo, while a high-necked blouse and skirt combo was done in the cartoonish cloud print, in shades of red and black. Christian Louboutin leather boots — with corset-like laces that ran up the leg — added a subversive edge.