Inspired by the look of a forest in autumn, Roksanda Ilincic's collection had an organic feel with thick wave patterns. 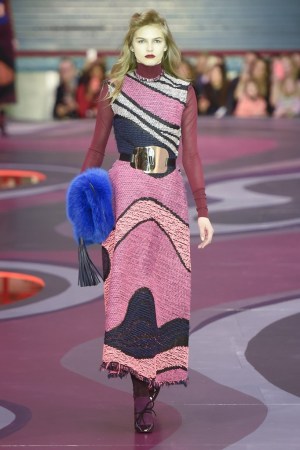 For the first time in a while, Roksanda Ilincic didn’t look to the contemporary art world, or even to a particular artist, to get the ideas rolling. Instead, she tapped into nature — earthy and human — for this rich and dramatic collection.

Backstage after the show, she talked both about an autumnal forest and about cinema, in particular “The Bitter Tears of Petra von Kant,” the 1972 film about an emotionally complicated female fashion designer. “This collection was more about feelings this time,” Ilincic said.

The lineup had a Seventies influence — it’s the decade du jour here in London — with big skirts that hit midcalf, tapestry fabrics with frayed edges and farmer’s market colors such as mustard and eggplant. Some skirts and dresses were made from a specially designed woven tapestry fabric with a nubby surface, while others had a wave pattern rolling across them in a patchwork of colors; one dress was even done in thick strips of different colored fur. Belts on coats and skirts had big, abstract-square silver buckles, a nod to the obi.

For evening, Ilincic toned down the volume, sending out an elegant clutch of slim silk trouser suits, dresses and jackets adorned with a 3-D grid pattern made from hand-cut organza petals and shiny PVC.