Marras dedicated his fall collection to Benedetta Barzini, the Italian model and actress, now in her 70s. 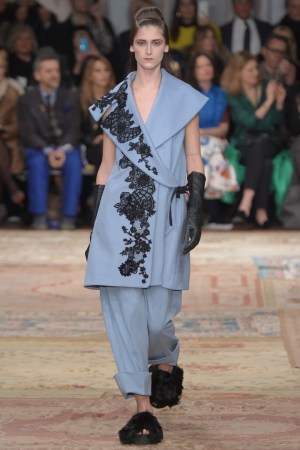 Antonio Marras is not the first creative man impassioned by Benedetta Barzini, the Italian model and actress, now in her 70s, to whom he dedicated his spectacular fall collection. In the Sixties, when she was on the Vogue and Factory circuit, Barzini was engaged to Gerard Malanga, Andy Warhol’s close collaborator, and her first husband was the Italian director Roberto Faenza. Marras is married to someone else, but his ode to Barzini was rife with adoration and romance. The designer’s shows are always deeply personal, but the emotion here felt especially alive as Barzini closed the lineup, a regal beauty whose natural face and seasoned poise reflected an extraordinary life.

Marras’ show notes were a love letter to his muse, explaining that the shades of pale pink, dusty blue, crimson and black pulled from paintings by François Boucher, Antoine Watteau, Jean Honoré Fragonard and John Currin were chosen with her in mind. Likewise the tapestry prints, rose motifs and upholstery fabrics that came artfully assembled on voluminous coats and paneled trapeze dresses and skirts, layered with ruffles and lace. The rich fabric work and lush silhouettes were “inspired by the Petit Trianon, because you are a Queen,” read the notes.

Elsewhere, masculine pin-striped tailoring and a gorgeous army jacket were encrusted with exquisite gold and black embroideries. There were fantastic, lean, wrapped styles, such as a black double-breasted corset worn over a long skirt with a structured Victorian ruffled hem, done “slender and fluid because you are a warrior.” Marras’ words were beautiful, but the clothes were the poetry.