Ennio Capasa harked back to his Goth-tinged designs in the Nineties. 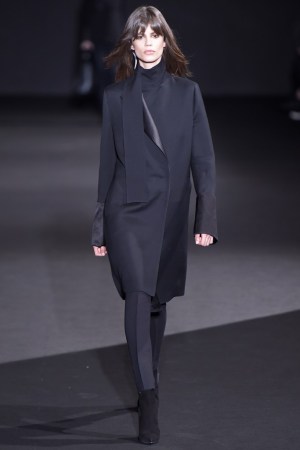 We hear you, Ennio. So instead of yielding to sundry cultural inspirations outside of fashion, Capasa hit the reset button and turned to one main reference — himself. Harking back to his Goth-tinged designs in the Nineties, his mostly black collection hardly floored you with newness, but clever details caught your attention: the way seams on a crisp biker jacket and lean leather pants were pierced with metal studs, or the way satin lapels, side stripes or cuffs jazzed up slim black coats.

These details also appeared on parkas, under which handkerchief skirts in shiny silk lapped seductively. Eye-catching, too, were small silver chains, embroidered on the edges of ruffles, spilling from asymmetrical chiffon tops or outlining the shawl collar of a smoking suit.

The slim, masculine tailoring was terrific, with similar styles paraded by both sexes. Slinky Polish model Zuzanna Bijoch moved like Jagger in her skinny pinstripes.