Dan and Dean Caten staged a showdown between several fashion tribes on their spring runway. 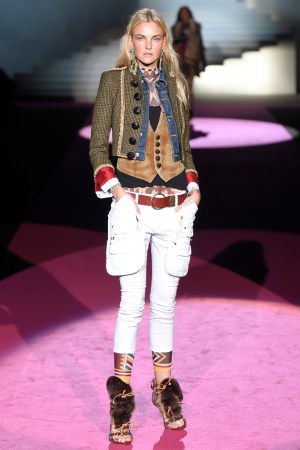 The trend-mongers are coming. Dan and Dean Caten staged a showdown between several fashion tribes on their spring runway. A pristinely tailored and decorated military brigade rumbled with opulent savages, romantic girly girls and tomboys — often all in one look.

Many of the models weren’t the regular runways girls but those who have graduated to Victoria’s Secret/Sports Illustrated status. Seeing Hilary Rhoda and Izabel Goulart in such getups gave the runway a Disney-esque camp. That said, much of what was on display was still current. Tailored jackets and cropped pants don’t appear to be disappearing anytime soon, and Dan and Dean’s quality and construction was on point.