Ermanno Scervino struggled to settle on a theme for his winter collection, so he picked a couple. 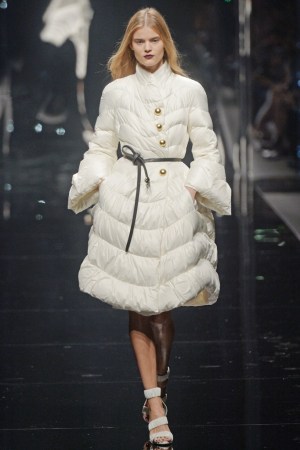 Ermanno Scervino struggled to settle on a theme for his fall collection, so he picked several. There was a houndstooth story, with the pattern magnified to varying degrees on dresses and coats. Rarely did he stick with just one version per outfit. Instead, different houndstooth iterations were juxtaposed or the motif spliced into other fabrics, such as the jagged horizontal bands on an embroidered scarlet shift dress.

The second motif was royal blue. The color dominated on outfits that included a belted astrakhan coat worn with thigh-high suede boots and a Fifties-style bustier dress in plissé pleats. In between were chic staples: a handsome military-inspired short coat and a slinky silver-and-black evening gown modeled by Jessica Stam. Less alluring were the trouser suits, which, with their wide jackets and cropped flared pants, were mostly unflattering.

Scervino is at his strongest when he works a retro Latin sensuality. This lineup tried to tick too many other boxes — and lacked cohesion as a result.