For his second women’s collection at the creative helm of Jil Sander, Rodolfo Paglialunga showed an increased comfort level with the brand legacy. 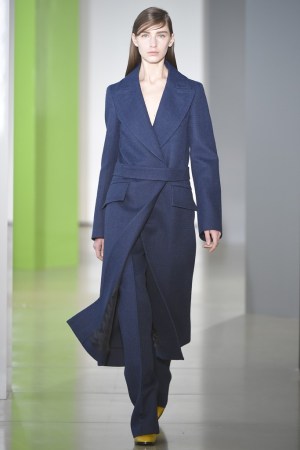 For his second women’s collection at the creative helm of Jil Sander, Rodolfo Paglialunga showed an increased comfort level with the brand legacy. His lineup honored the German founder’s minimalist credo with an ease and sense of movement that was missing in his debut. There was also a whiff of the artful, midcentury modernism that Raf Simons brought to the house a few years ago, specifically with the palette — cobalt blue, bottle green, yellow, chalk pink and optic white — repeated in the plinths that intersected the show space.

Paglialunga mixed the colors freely, layering a pink shirt with a yellow ruffled turtleneck under a cobalt blazer and tailored pants that were cut wide and cropped. He also splashed geometric, diagonal patterns on sweaters and slim wrap dresses. The color play energized the vertical silhouettes, which were chic but stoic in a range of slip dresses, sheaths, skirts and tailored outerwear, all cut to midcalf.

Without making a grand statement, the designer offered a lineup of solid merchandise that will serve Sander clients, whether they were disciples of Jil or Raf — or are simply drawn to the look of streamlined modern luxury.