Massimo Giorgetti decided to flex his creative muscles in a new way for fall, daring to exclude the digital prints that had caught everyone’s attention. 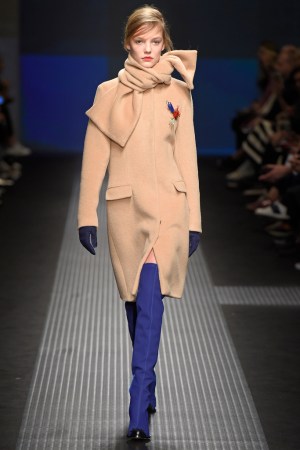 After building up a $45 million business lickety-split, Massimo Giorgetti decided to flex his creative muscles in a new way for fall, daring to exclude the digital prints that had caught everyone’s attention. Instead, he stoked his seven-year-old brand’s spunky personality with acid colors and dynamic colorblocking and patchworks, while dialing up the sophistication of what is considered an advanced contemporary range.

Even if pointy collars, sweater vests and cropped pants with a kick flare winked at the decade Milan just can’t get enough of, the lineup felt rooted in the now. Giorgetti decorated plain clothes with dynamic intarsia stripes; 3-D heart embroideries that sprouted off clothes like tropical leaves, and spirograph dots of lace scattered like snowflakes. Furry coats were mash-ups of astrakhan and shaggy Mongolian lamb, or fluffy feathers and tinsel.

The packed runway theater reinforced that Giorgetti is a name to watch, with LVMH Moët Hennessy Louis Vuitton a keen observer, courting the young Italian for Emilio Pucci as Peter Dundas wraps up his tenure. Backstage, Giorgetti hinted that talks are ongoing — “it would be an honor,” he demurred — while stressing that his fast-growing brand, now shipped to 700 doors, remains his top priority.
Separately, WWD has learned Giorgetti has another suitor. According to market sources, DGPA SGR, the Italian investment fund that owns Golden Goose, is in talks to take a significant stake in MSGM.