Here was an eclectic collection of slinky, showy and sexy clothes unified by dense decoration. 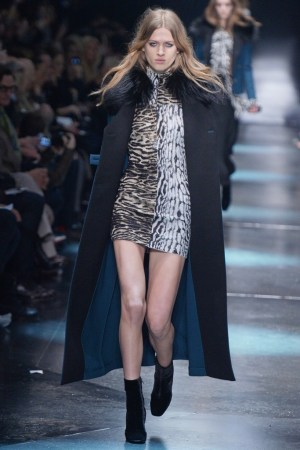 About midway through Roberto Cavalli’s fall show, a couple of hefty military parkas appeared. They stood out on his runway like Anna Dello Russo would at Esselunga.

Not that they betrayed a specific theme. Although Cavalli spoke about China as his chief inspiration before the show, and had “Crouching Tiger, Hidden Dragon” actress Michelle Yeoh sitting in his front row, the collection he presented was eclectic, full of slinky, showy and sexy clothes with no room for something as practical as warm outerwear.

Cavalli opened proceedings with a racy animal-print minidress under a trim, fur-collared coat left open to expose those obligatory toned gams. Then came sexy sailor pants, checkered furs and pleated gowns slashed and then gathered like curtains, creating diamond-shaped cutouts at the midriff. Ruffled maxidresses and patchwork croc-pocket jeans ticked off the Seventies trend. Cheongsam necklines, spiky “pagoda” buttons and Ming vase and screen patterns were among the signposts of Cavalli’s new “China Girl,” as his press notes anointed her.

When the finale came, the diverse and intricate details came to the fore. So did the impressive ways the designer incorporated shine and texture into each and every exit, knowing his clients are largely looking to stand out, not bundle up in a parka.