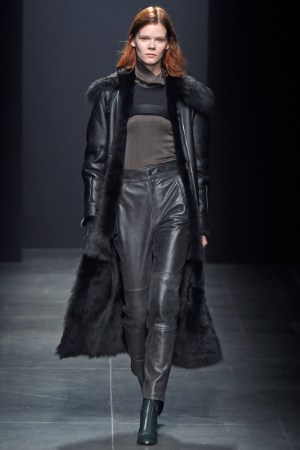 For his debut Ter et Bantine collection, creative director Kostas Murkudis looked to Sarla Thakral for inspiration. The first Indian woman to get an aviation license, in 1936, Thakral went on to become a commercial pilot during World War II. Later, she earned a fine arts degree and became a painter, fashion designer and entrepreneur.

Murkudis successfully translated the complexity and richness of Thakral’s exciting life with a collection combining a masculine, utilitarian look with very feminine details. He opened with a range of black leather outfits that had an aviation feel, including a black shearling coat worn with slim pants and a maxi trench cinched at the waist with a thick belt.

The collection then veered into softer, more fluid silhouettes, such as a tunic dress cinched with a side belt to create volume, as well as a roomy utility jumpsuit worn under a maxi parka. Its back was decorated with a delicate embroidery laced with feathers, which also appeared on hyper-feminine dresses, sometimes shown in a mix of colorful jacquard panels and organza inserts.