To celebrate its 185th anniversary, the brand made its signature red-and-black buffalo checks the focus of its fall collection. 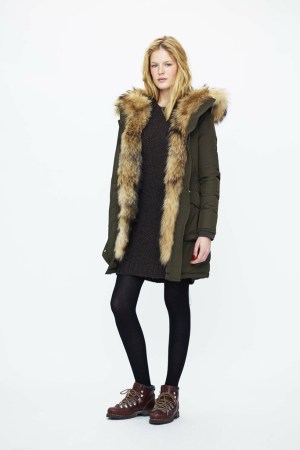 To celebrate its 185th anniversary, Woolrich John Rich & Bros. made its signature red-and-black buffalo checks the focus of its fall collection. The pattern appeared on a wool parka with its hood trimmed in fur, while a cape was done in a micro version of the same pattern.

The brand, known for its functional outerwear with an urban feel, also expanded its knitwear offerings. These included a soft pale blue turtleneck paired with a pleated tartan maxiskirt, as well as a cream zippered sweater with both the front and the hood decorated with fur.