Adam Lippes wanted a collection where people are forced to take a second look. 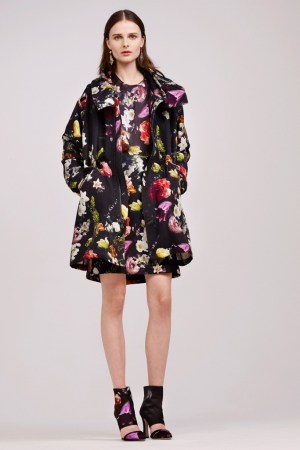 Adam Lippes was inspired by the photographs of Philip-Lorca diCorcia’s 1993 show at the Museum of Modern Art. One wonders why at first glance, but that is the point for Lippes. “I’m creating garments,” he explained, “that force one to look again” — at the fabrics, the construction (both inside and out) and the almost-hidden details. “What seems basic and simple is not.” A little black relaxed slipdress had hidden side pleats and an asymmetric sheer panel, and a black leather coat had a snap-out silk quilted lining. Up close, a knockout classic black-and-white tweed skirt and a Chesterfield coat were covered with gray pearl studs.

A Lippes presentation is always about great-looking clothes and a few surprises. This season, the designer said he did “more furs than usual,” (two) one of which was a French Orylag, which feels like chinchilla, cut in a simple overcoat in a rust and ivory which he called “roasted marshmallow.” He also designed his first bold print — a brights-on-black floral done with the florist Putnam and Putnam — used on pants, jackets, T-shirts and dresses in a refined range of fabrics that included silk organza, cashmere and wool.