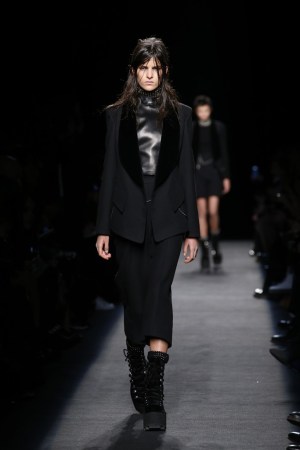 As much a student of streetwear as he is an influencer of the genre at this point, Alexander Wang has built several of his recent collections around street subcultures. Sneakerheads for spring, surf and skate for men’s. His fall design process began with an analysis of what gives cult items value, what makes brands scramble for nostalgic collaboration, and he concluded with the theorem that identity is all about pattern and color. Wang’s favorite color is black and he’s not alone.

“Our retailers are always saying, ‘Can we have the black version?’” said Wang during a preview. “So I said, ‘Why don’t we just do an all-black collection?’”

Technically the lineup was not totally black — there were two ivory fisherman sweaters worn with stonewashed jeans, two red plaids and a few metallic mesh getups. The rest was pitch black and hardcore, framed within the street sect of heavy metal. Had Wang enlisted an old-school collaborator for cred, it might have been Hot Topic, the mall store where angsty, alternative teens buy clothes that scare their parents.

It was a gutsy, defiant collection. References to metal abounded in the very sophisticated construction of the clothes. Severe, mannish tailoring of cropped pants and harsh jackets had pocket chains made of little silver balls that also trimmed coat collars and dresses with panels cut to mimic Gene Simmons’ Demon face paint. The same pattern recurred on handbags. Quilted pieces looked made from luxe packing blankets — I’m with the band!  — while silk pajamas and bathrobes reflected the lush side of goth.

All of the details, the design equivalent of puns, were part of Wang’s playful spirit, yet the attitude of the show was seriously aggressive. The models stomped out in extreme platform lug-sole combat boots with wet, stringy hair covering their zombie faces. Two fitted velvet crop tops, worn with skirts that swished with silver fringe, were womanly in a witchy way, but there was not a soft side to this collection. Wang was unflinching in his point of view and there’s a lot to be said for such conviction. Plus the retailers can sell black all day long — and all night long, too.