The designer was inspired by the History Channel’s “Vikings” series for her fall collection. 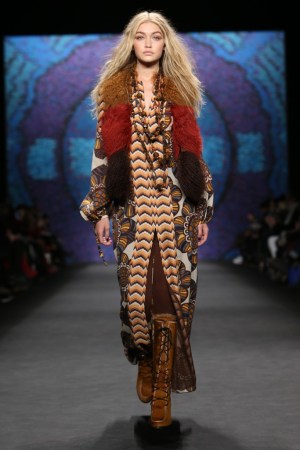 After she killed time on a flight by watching the History Channel’s “Vikings” series, Anna Sui became obsessed with the show and its “sexy, racy gorgeous cast and setting.” The question at collection time was, how to use it? She happens to be an interiors enthusiast (with a recently launched home collection in Japan), as were the Vikings’ fellow Scandinavians with their fertile midcentury period, Marimekko and other purveyors of bold textiles — which lend themselves nicely to fashion. And Sui had a field day mingling these Nordic references with her signature genre of bohemian rock and mixing a feel-good soundtrack of Abba songs to go with the show.

Sui knows who she is as a designer and doesn’t pretend to be anyone else. Her collection felt as natural as the finish on a midcentury wooden chair. There were sweet hippie dresses printed with folkloric florals and overalls in wallpaper jacquard. The clothes came in her preferred palette of purple, gold and black and the filmy flowerchild stuff was topped with all manner of great funky furs, real and faux. Some of the best were curly lamb jackets and vests, and there were great Baja-esque knits, too. It was a cozy, colorful affair fit for a folky snow-in. A cold-weather warrior goddess closed the show in a cream faux-fur cape with Viking embroidery over a dreamy, silver-sequined maxidress. The look was topped by a knit Viking horn hat, because it ain’t over until, well, you know.