When Jason Wu took on the role of women’s creative director of Hugo Boss, he took on a considerable challenge. 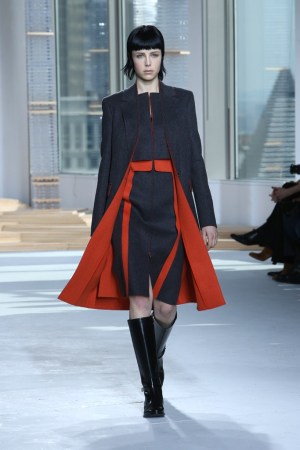 When Jason Wu took on the role of women’s creative director of Hugo Boss, charged with developing a women’s presence for one of the most storied men’s powerhouses in the world, he took on a considerable challenge. Recent history indicates that it’s difficult — not impossible, but difficult — for one designer to juggle the demands of designing for two houses. Then there’s the matter of establishing the house’s feminine aesthetic. What should it be, and how closely must it link back to the men’s wear?

Not surprisingly, the Boss Hugo Boss concept is built on tailoring. That’s fine, but maybe not quite enough, at least for the runway. Wu has done a game job of working the tailoring angle and the in-house technology that gives him access to endless techniques. “In the atelier, there are no scissors. Everything’s laser-cut,” he marveled before his show. Thus inspired, Wu layered an industrial motif onto the tailoring. This gave the clothes graphic impact, coats and dresses crafted from blocks of fabrics, often featuring precision arcs and curves. These were particularly bold in charcoal gray and “traffic cone orange.” The fabric blocking proves an important treatment; in keeping with the industrial motif, Wu developed several corrugated materials that inserted interesting texture into the mix. He also worked in moments of softness, in crepe sheaths with intricacies of cut and more fluid dresses in what appeared to be textured knits.

Some looks were appealing, some swung cumbersome. In total, they lacked a strong point of view beyond the fusion of tailoring and technology. Going forward Wu must figure out how to marshal the considerable men’s wear-oriented strengths of Hugo Boss into a clear-cut, feminine vision for Boss.