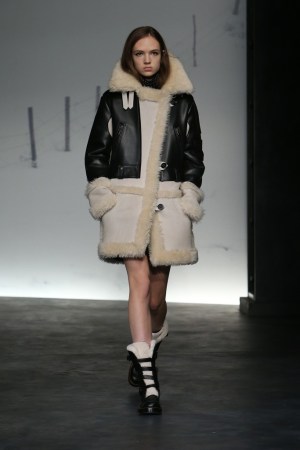 This season Stuart Vevers gave his favored cool girl the idea of “being in the middle of everything and in the middle of nowhere,” places he says remind him of “Middle America.” He discovered this firsthand pre-Coach, during five years taking Amtrak jaunts to Midwestern towns, and thus constructed a giant set resembling train tracks set in a barren winter wonderland — perfect for the parade of shearling he presented. It came spliced, patched and treated with an array of finishes for car coats, short jackets, vests and want-it-now variations on the leather moto jacket. Positioning Coach as an outerwear brand “is natural for a leather goods house,” the designer said.

But a gal needs something to wear under all those coats, and Vevers offered mixed-material dresses with a nod to grunge, reworked fisherman sweaters and patchwork leather leggings. Accessories, of course, completed the look. There were fur-lined combat-style boots, leather belts with charms and silver nameplate and block-letter necklaces spelling out the key words of the collection: Wanted, Nomad and Lucky.