Creatures of the Wind RTW Fall 2015

The fall collection from Creatures of the Wind explored psychedelic Americana. 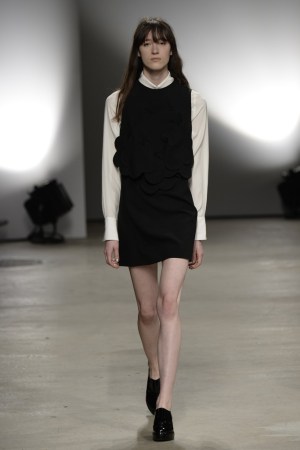 Shane Gabier and Chris Peters don’t do obvious. Trends and clichés are avoided in favor of layered, semiobscure references. So by titling their fall collection Americana, they weren’t really giving away clues. There were stars — worked large and graphic on incredible sheared-mink intarsia stoles — and stripes, shown in black and gray on a beautifully tailored cashmere wool cape worn with pink trousers. But no red, white and blue. It was another excellent lineup of clothes that are increasingly sophisticated and luxurious and still stem from the designers’ very unique point of view.

Backstage, Gabier described the collection as “reimagining different moments in American pop culture.” There were whiffs of late-Sixties rock ’n’ roll in the trim melton minidresses with buttons up the shoulders, and the Seventies, too, in a more bohemian, filmy pink chiffon dress with metallic scalloped details. But there really was no overt era to pinpoint for the silhouettes and array of patterns — electric plaids and dusty floral jacquards — which is rare in fashion these days and something to applaud. Some of the best looks bore a Japanese influence, such as the artfully knotted flowers embellishing a black-and-white cotton skirt that looked like gingham at first glance but was actually harlequin diamonds, and the refined tailoring of double-breasted coats with spread collars and shrewd seamwork that created soft pleats.

Creatures of the Wind RTW Fall 2015