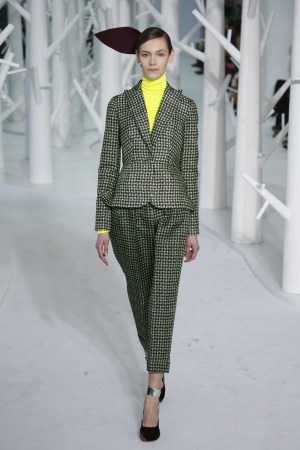 At New York Fashion Week, one can expect to see collections of perfectly wearable clothes, perfectly well-made and sure-to-be retail successes — over and over and over again. Thus, a Josep Font show for Delpozo is like a fashion editor’s dream come true. Season after season, the Madrid-based designer transports us into the unusual, inventive world that is his imagination. Always art-informed, his collections blur the boundaries between reality and fantasy. Fall was no exception.

Australian artist Rhys Lee, whom Font described as “very sinister but colorful at the same time,” and Russian painter Andrey Remnev, who creates a “modern interpretation of the Pre-Raphaelite spirit,” served as inspiration. A stark runway lined with leafless white trees was the ideal set to showcase Lee’s influence on Font’s color palette — neon pink, lemon yellow, Yves Klein blue — while the designer’s constructions were a nod to Remnev’s stylized depictions of women. “The idea and purpose here is structure,” Font said. “When you look at the clothes they seem minimal, but the patterns, the construction are very complicated.”

Minimal? Not quite, but one could make an argument for simple. Font played with geometry and volume in silhouettes that ranged from ample felt dresses with metallic appliqués to rounded balloon sleeves on coats and blouses. Knits were a romantic explosion of texture: a gray mock neck had red gathering and fringe that formed a floral pattern, while a crafty pink dress over a neon-yellow turtleneck was striking in its purity. Font’s black crepe dress with a nude bodice and tulip skirt worn over a pink velvet turtleneck showed restraint, and a great V-neck minidress with sheer blue sleeves and corsagelike floral embellishment at the shoulders epitomized his dual inspiration.