A year into Luella Bartley and Katie Hillier’s tenure at Marc by Marc Jacobs, their message of youth, energy and grit remained strong. 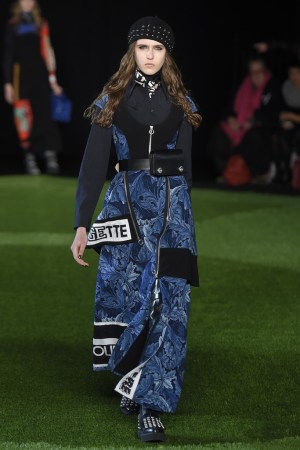 A year into Luella Bartley and Katie Hillier’s tenure at Marc by Marc Jacobs, their message of youth, energy and grit remained strong and unwavering in attitude and aesthetic, though some calibration has been involved. “We’ve learned a lot of commercial things from the market,” said Hillier. “It’s a business but it’s also finding the balance, not making it dumbed down just so it sells.”

Bartley and Hillier have already secured their girl’s identity through a commendable consistency in the collections — the military references, graphic art, moto jackets and tailored skirts with tulle. For fall they steered in a defiant but positive direction, drawing on references including the work of artist William Morris, the Guardian Angels, the 1979 film “The Warriors” and Jeremy Deller’s political posters, which were channeled into graphic decorative statements — the word “suffragette,” for example — that blared from the outfits. It was not a political statement, but a state of mind. “There’s a bit of protest, but it’s more youth culture and power to change,” said Bartley.

The most notable progression were the long, lean silhouettes of structured maxiskirts and dresses, some with utility pockets, some bearing Morris’ pretty Arts and Crafts prints in shades of bright blue and muted green. The length gave the look a cool maturity that resonated in the refined cuts of neat, tailored fencing jackets, skinny cropped trousers and short dresses with molded bell-shaped skirts that had a smooth buoyancy. Embellished berets, biker belts with little utility pouches attached and studded shoes played up the militant mood in an aggressive but nonconfrontational way.