Whether or not Jacobs has something to prove, he chose this strategic moment for his house to simultaneously answer and thumb his nose at his critics. 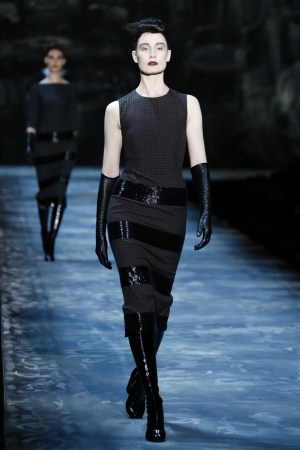 Does Marc Jacobs have something to prove? “We’ve been criticized for flipping 180 degrees,” he said during a preview. “[But] in the manner of the late, great Mrs. Vreeland, that’s what fashion is: You love it till you hate it; you hate it till you love it.”

In solidarity, Jacobs pilfered from Mrs. V’s apartment for his set, specifically a Jeremiah Goodman painting of her famed red living room interior. Stefan Beckman tapped Oliphant Studios to recreate the canvas, exploding its proportions to run the length of the Park Avenue Armory on both sides, with a charcoal version as the backdrop around which the models emerged.

Whether or not Jacobs has something to prove, he chose this strategic moment for his house to simultaneously answer and thumb his nose at his critics. You want codes? You want constancy? You want merch categories covered? He’ll put it all out there: austere, sexy sheaths (yes, sexy sheaths); snappy pants; sweaters; dresses; coats, coats, coats; enchanting gowns and others safe enough for the red carpet. But he’ll do it all in the context of what he wants: something to love until he hates it. Fashion purist that he is, Jacobs thinks that’s the point, and it’s not at odds with commercial viability.

He spelled out his seasonal flip-flop. “Last season, it was so about military as an influence but it became cartoony; this is more about military precision with no military reference,” he said. Everything was planned, crafted and polished to arch perfection, starting with the beauty — severe top knots and makeup; pristine manicures and pedicures despite gloves and covered shoes.

When many of these motifs first appeared in the Jacobs lexicon they were simpler: a dress with faux-pleats made of fabrics was just that. Here, everything was jeweled, embroidered, grommeted, sequined. Brocades topped crinolines and lined furs. A tweedy twinset was in fact sequins; an argyle, faux-python embroidery. Shearling was shorn into checks, mink sewn into chevron stripes and worn on the reverse side. Mannish coats flaunted sparkling jet cascades.

The work was remarkable, and the clothes, as fabulous as they were varied and useful — and uncompromising. “Many things are fine,” Jacobs said. “I don’t want fine. I want, ‘I can’t live without it,’ and then, ‘I’d never be caught dead in it.’ That’s better than fine. That’s obsession.” Which sounds like another word for fashion.