Michael Kors loves a contradiction. For fall he worked a motif of opulent restraint to chic effect. 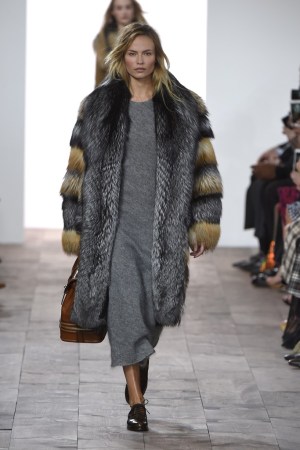 “How do you wear opulent on a regular basis,” Michael Kors mused during a preview. He found the solution in his love of contrast. His autumnal oxymoron: opulent restraint.

The concept is a very American idea, he noted, “whether it was Wallace Simpson back in the Thirties, Babe Paley at her height, Carolyn Bessette Kennedy. All of these women understood this idea, they knew how to play with the yin and the yang.”

Yet, engaging though his conversation is, Kors may do himself a disservice by his frequent invocation of chic gals of yore. His salient point, about a constancy of American style of which he is a scion, can be misinterpreted as a case for retro, which it’s not.

Sure, he has his references, who doesn’t? But Kors just might be the ultimate modernist. Not because he makes cool clothes derived from the street or because he experiments manically with silhouette or because his furs pop like magic out of a 3-D printer. Kors is a modernist because he grasps and embraces the real modern customer and designs to her needs with thoughtful panache. Along the way, he works a deft (and all too rare) skill, keeping his runway real-looking and interesting. To that extent, these were quintessential fashion editor clothes.

Kors’ fall collection was runway reality at its most alluring. He showed both languid and tailored, the former in pretty bias dresses and sweater dressing to die for; the latter working that gender yin-yang crossover — tweeds, trousers, crisp shirts and especially the outerwear, including a trench-cape hybrid worthy of an ultrachic Sherlock. For all of the above, check the restraint box.

In the opulent column, Kors’ fabrics were luxe, but often quietly so — the tony cashmeres and wools, the silk foulards. Not so a gold metallic dress and graphite caviar-beaded gown. And the breathtaking furs. With restraint appropriate to the designer’s premise, they came as cuffs, collars and mufflers, and even as big cozy pockets on a sweater. But at times, restraint went delightfully AWOL, replaced by a huge fox robe, a damask intarsia mink and a fox coat worn over a sweater and lace skirt. This was one of a few looks in a gorgeous peacock blue that provided an injection of powerful color into a mostly earthy palette.

For evening, Kors went wacky for a moment, with two black dresses, one Chantilly lace, one bias georgette, that looked as if they’d wandered over from another runway. No one’s in particular, but in their girly fussiness, they didn’t look like Michael Kors. Not so the divine tuxedo gown and a pair of jeweled pajamas worn with a fox muffler. Yin-yang — yes!