The jumping-off point for Costin’s women’s offerings was a “sexy shape” executed mostly with a strong shoulder and a nipped waist.

IsSixWeeksAfterFashionWeek = false
By Roxanne Robinson and Frederick Marfil on February 16, 2015 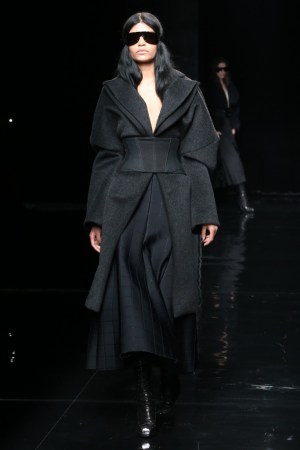 “I think something that’s missing in fashion are clothes that make you feel like you can face your day being bolder and stronger,” Porsche Design’s Pierre Costin said backstage as he presented what he considered the “ideal uniform for the future.”

The jumping-off point for Costin’s women’s offerings was a “sexy shape” executed mostly with a strong shoulder and a nipped waist. As has been the case this season, outerwear reigned, with calf-length wool coats, shrunken bombers and blouson aviators as the main message. Almost all were shown with a leather corset belt and paired with full skirts, long slim sweater skirts or cropped pants. Military touches, in line with the uniform theme, were seen throughout in a palette of black, gray, camel and loden.

For men, the lineup was also about structure as well as mixed-media outerwear. Highlights included a heather-gray wool cape, a leather trenchcoat, and an anthracite banded blazer paired with a black turtleneck and nylon trousers — a great way of incorporating technical fabrics in traditional tailoring for performance. While the concepts were strong, the execution lacked the finesse that would have given the clothes a greater sophistication.