This collection pulsed with a raw power that started if not quietly (no subtleties here) then simply, and escalated into an intense tribal reverie. 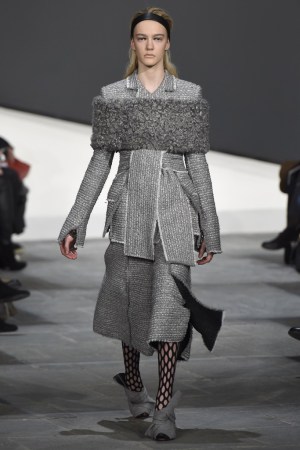 “Not over-thinking it, just doing it.” Lazaro Hernandez explained the attraction he and Jack McCollough saw in the work of the abstract expressionists of the midcentury New York School that inspired their fall Proenza Schouler collection. They looked specifically at the work of Helen Frankenthaler. “She was just this really inspiring character for us, the whole idea of expressionism and spontaneity…this rawness to creating.”

Yes and no. Fashion is, to a large degree, about deception. This collection pulsed with a raw power that started if not quietly (no subtleties here), then simply, in the unfinished edges of thick tweeds and escalated into an intense tribal reverie. While one could attach a spontaneous spirit to the primal intensity, in reality, there was nothing haphazard about it. Rather, this was the result of a bold, experimental design process that paid off big-time.

The first look out set the tone of bravado — a tweed jacket and pants, everything about it exaggerated: unfinished seams, extralong sleeves; wide, looped-over self-belt; pants made of flapping panels, giant-sized fishnet hose, a thick, circular shawl encasing the shoulders.

All of those elements would recur, becoming more extreme and visceral in a fabulous display of fashion. The dominant silhouette was lean through the torso, releasing into more volume starting with the powerful lineup of coats and jackets in spotted calf, boiled felt inspired by the splayed felt work of Robert Morris, and a black swakara beauty worn by a male model. The fabrics were major, from the array of tweeds to various needle-punched treatments, including a black and red chiffon crepe that created a mottled, aged effect.

The weightiness of the outerwear found counterpoint in a new take on the bandage dress, wrapped and slashed to reveal skin and attitude. Another dress, a white sheath, got tufts of au sauvage fur at the waist and shoulders. Eventually these ideas mingled, becoming increasingly decorative for the finale of triballike motifs rendered in slashes, eyelets, grommets and intense embroideries, worn by a procession of glamorous she-warriors. Power dressing of a different sort, and it rocked.