The designer homed in on ease and fluidity, eschewing the voluminous and sculptural evening looks for which he is known in favor of leaner silhouettes. 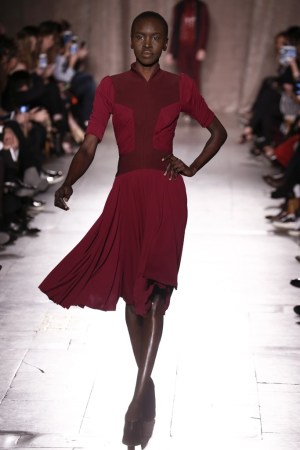 Zac Posen’s got a new attitude. For fall, the designer homed in on ease and fluidity, eschewing the voluminous and sculptural evening looks for which he is known in favor of leaner silhouettes — largely in jersey — with engineered pleating and draping allowing for a new sense of movement.

It was a refreshingly modern evolution for the designer, and the point was driven home when model Anna Cleveland, daughter of legendary Pat Cleveland, twirled down the runway in a navy jersey gown with waist cutouts. She was pure liquid.

“You’ve got to keep it surprising and add new styles and feelings to the vernacular,” Posen said during a preview of his jewel-toned lineup, which had a slight Seventies vibe. “As an arc, we wanted the elegance of Grace Kelly meeting the spice of Chaka Khan.”

But the real story here was in Posen’s eveningwear, with a saffron-yellow mink top and draped skirt worn by model Alek Wek standing out as the winner (Posen’s runway casting was as wonderfully diverse as it comes). His gowns featured elegant shoulder draping, patterned waist cutouts and bugle beading, though the simpler, cleaner silhouettes worked best.

Naomi Campbell closed the show in the show’s only bonafide ballgown — a voluminous metallic ruby paillette taffeta number, almost Jeff Koons-esque in its architecture — which Posen referred to as “a surprise; just a tease.” It felt as if he was saying, “Don’t worry guys, it’s me, I’m still here.” For those who miss the designer’s no-holds-barred drama, fear not: Ballgowns are still in his larger fall collection. He just chose not to show them for a change, and perhaps smartly so.