Jean Touitou presented a collection dominated by minimal geek-chic basics in a palette spanning the many nuances of blue. 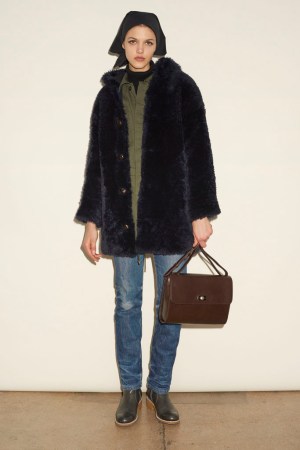 Citing influences that included his own mother, author Marguerite Duras and the early days of French ready-to-wear, Jean Touitou presented a collection dominated by minimal geek-chic basics in a palette spanning the many nuances of blue. He paired navy Shetland sweaters with straight indigo jeans that were slim without being skinny, and offered an array of wool or tweed coats in varying shapes as well as a choice of androgynous buttoned-up shirts. Some of the skirts in the lineup, such as a buttoned A-line in navy, had an on-trend Sixties vibe paired with simple black sweaters, while his red tweed roll-necked dress with a wide box pleat was a standout.